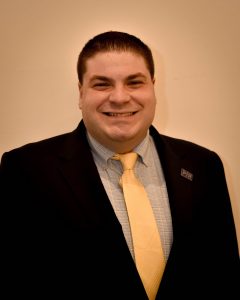 Robert Acerra, Director of Member and Board Services
r.acerra@njpta.org

Robert Acerra began as the Director of Member and Board Services on June 1, 2020. Rob has served in all levels and positions of PTA for over 16 years. Rob has been a member of PTA since 2004. Rob joined PTA when he was a Freshman at Ocean Township High School in Monmouth County.

New Jersey PTA has over 100,000 members and serves schools and communities in all 21 counties. Before serving as a New Jersey Staff Member, he served on the NJPTA Board of Directors from 2007 to 2020. He served as President-Elect, Vice President of Leadership Development, Vice President of Communications and Programs, Secretary, Treasurer, Magazine Editor, and Student Representative. Also, Rob served as the State Lead for National PTA’s College and Career Readiness - having the opportunity to collaborate with educational partners throughout the state. He also was the Chairman of 2015, 2016, 2017, and 2018 New Jersey PTA Conventions. His contributions have earned him a New Jersey PTA Honorary Life Membership.

Rob also served on the National PTA Board of Directors from 2011 to 2013 and served as the National Youth Involvement Committee Chairman.

Rob currently resides in Atlantic Highlands in Monmouth County. He also dedicates his time to leadership development for high school students. He is the District Administrator of Kiwanis’ Key Club in New Jersey. Key Club is the nation’s largest student-led service organization with over 10,000 members in New Jersey. He has served in the Kiwanis Family since 2004 in Key Club, Circle K, and Kiwanis, where he is a past Lieutenant Governor and Convention Chairman.